BEHIND THE SCENES AT SHIRE FARM

Shire Farm, nestled in the Lincolnshire countryside in England, is where many of the plants and herbs used in Aura-Soma’s products come from. It is our spiritual and physical home and is farmed to biodynamic standards - a farming standard that goes far beyond organic. 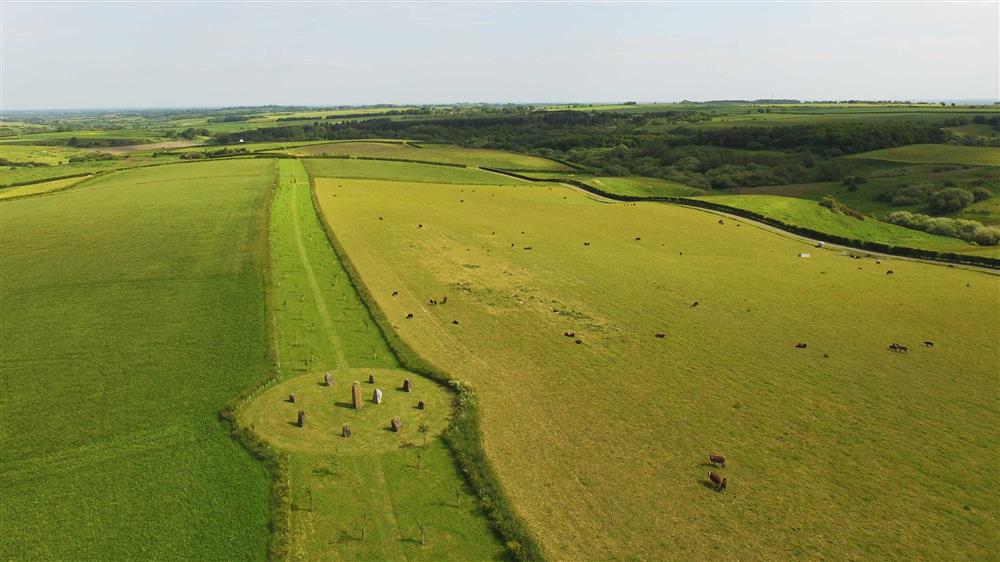 Covering over 500 acres amongst rolling hills, Shire Farm is a delight to the senses. At the height of the season you can feast your eyes on the vivid reds and yellows of poppies, calendula and sunflowers and inhale the heady aroma of clary sage, lavender and rose while bees and other pollinating insects busily buzz all around.

Black Zwartbles sheep and Dexter cattle roam freely on green pastures while our golden fields of spelt are a picture of countryside idyll. Rich in biodiversity and tended by dedicated farmers who cherish the land, Shire Farm is a true natural haven.

What is biodynamic farming?

Biodynamic farming reflects many principles of organic farming, but there’s a fundamental difference. Biodynamic farming means creating an ecosystem that’s capable of producing everything it could possibly need without any external input.

Biodynamics views the entire farm as a self‑sustaining living organism and recognises the importance of each component functioning together as a whole. Because of this, every living creature on the farm – from the humble earthworm to the insects and flowers – are playing a valuable part.

This method of farming was started in the 1920’s by visionary, scientist and educator – Rudolph Steiner. He was a remarkable man whose intuition and intellect led him to realise the dangers of emerging synthetic fertilisers and poor soil conditions before anyone else.

He also recognised how the western way of living was impacting the earth and pioneered the thought that a farm must be treated as a single self-sustaining organism that flourishes through biodiversity and the interdependence of all living things.

What do we grow at Shire Farm?

As many of Aura-Soma’s plants and herbs that our climate permits are grown biodynamically on Shire Farm. They’re grown to Demeter-certified standards, which is a far more comprehensive standard than that required for organic farming.

It’s here on Shire Farm that we nurture our rosemary, sunflowers, calendula, clary sage, melissa (lemon balm), lavender and roses, among many others. As well as Aura-Soma’s ingredients, we grow many ingredients for AEOS Skin Care and Pegasus Parfum, two of our other companies that reflect our commitment to our Soil to Soul philosophy.

In the 11 years since the farm was established by Aura-Soma’s Mike Booth, we’ve had interest from many others who share similar intentions for the earth as we do. Because of this, we now grow spelt, rye, barley and herbs, with many bakers commenting on the superior taste.

By adhering to strict biodynamic farming methods – holistic and self-sustaining with high standards of animal welfare and deep respect for the earth – we’re able to grow the purest, most active ingredients possible, all without the use of artificial fertilizers and pesticides.

Just as humans have chakras - subtle energy centres in the body that energy flows through - Mike Booth designed Shire Farm to have very clear chakras too. We even have a chakra path, which offers places of quiet contemplation.

The journey unfolds through the following areas:

Our chakra path is another demonstration of our philosophy, of nurture and be nurtured, as the vitality of the land has a beneficial effect on the wellbeing of humans and vice versa.

As with the human chakra, each energy centre is related to a specific colour and has been identified with crystals from particular parts of the world. For example, the red energy centre at the far end of the farm has ruby, rubellite and rose quartz crystals, placed to help ground energy.

If you’re interested in joining us, Principal of the Aura-Soma Academy, Mike Booth is leading a Chakra Walk on Shire Farm in May 2022. He says: “I think the Chakra Path is like a microcosm, a small version of a bigger picture. What we will do on that Chakra Path is like a small contribution to something which is much greater, to work on a being in the landscape is to honour the Earth at this point in time, which means our love, our care, our consideration. The gesture of what we do in relation to this contribution to the smaller thing towards the bigger thing is not insignificant.”

Over the past 11 years, Shire Farm has become an integral part of Aura-Soma, allowing us to truly live our Soil to Soul philosophy.